One Family Changed Everything 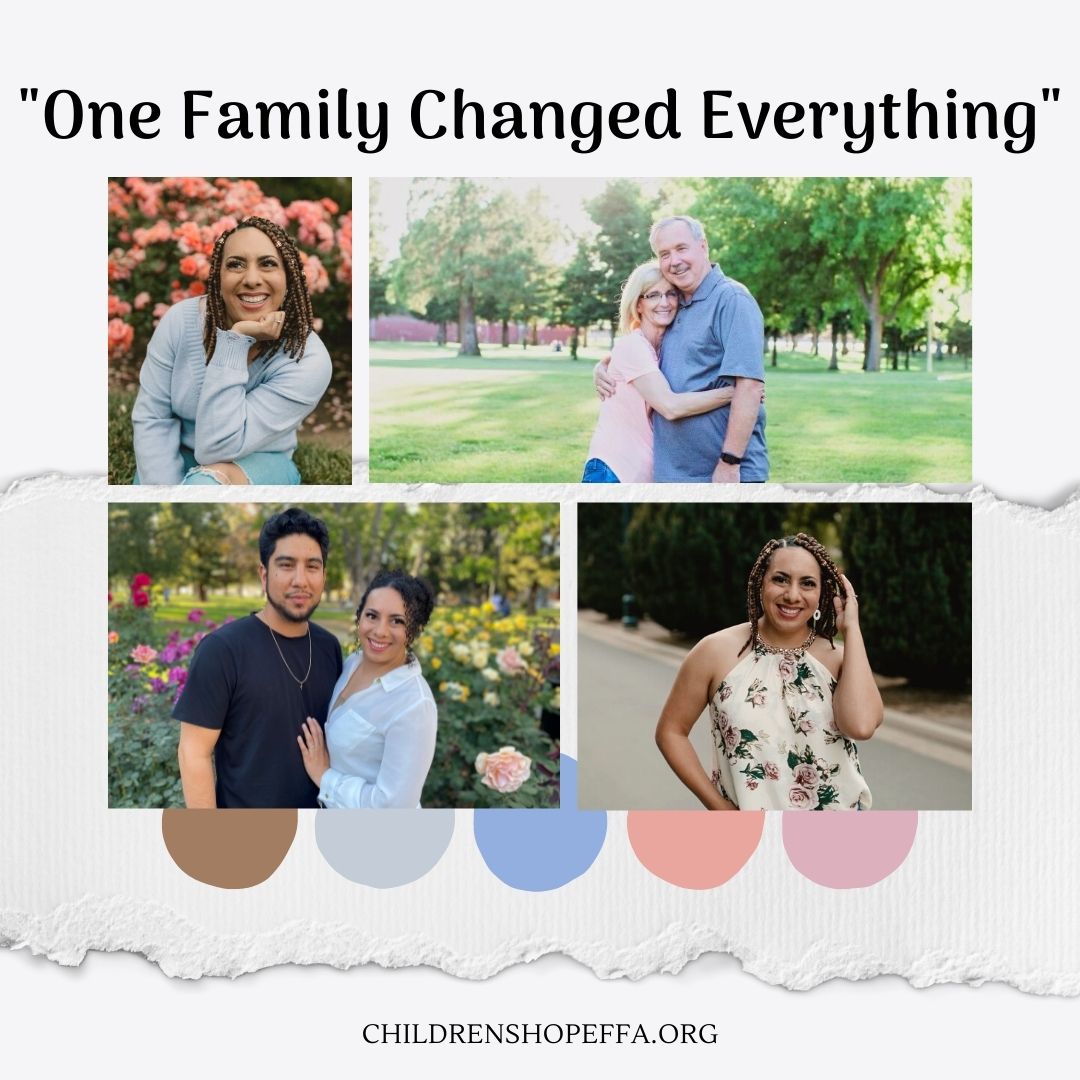 Steffanie Sanchez and her four siblings entered foster care when she was just 9 years old.  She had known a life of homelessness and growing up in a household of drug addiction.

Coming into foster care, Steffanie and her older brother were put into the Children’s Receiving Home of Sacramento, which is where they resided for the next two and a half months.  Her two younger siblings were placed very quickly into a foster home and were later adopted.

Steffanie’s happily ever after did not come quite as quick.  Steffanie stated that, “What still reigns true today, that it’s hard to find homes for teens, was true back then.”

Steffanie spent the majority of her childhood bouncing from one foster home to the next until the Kramer family stepped in.  Steffanie was 18 when she joined the Kramer household.

This home was the first example Steffanie was ever shown of a loving marriage, healthy sibling interactions, and what a positive relationship with a mother and father looked like.

She thought that this was going to just be a four-month stay until she graduated high school, but little did she know, that they were hers for life.  Steffanie said that she did not make it easy on them though.  She had it engrained in her brain that she was worthless and undeserving of love.  She had so much anger that had built up over the years that she was never able to find an outlet for, but the Kramers never wavered in their love and commitment to her.  They showed her time and time again that no matter what she did or said, they loved her unconditionally and they always would.

Eventually, Steffanie believed them and surrendered to the idea that she was, in fact, worthy of a family, worthy of being loved, and worthy of beating the statistics of youth aging out of foster care.

Steffanie went on and finished her college degree while being involved in a program called Fostering Success and Significance (FSS) which is a non-profit that walks alongside youth who have aged out of foster care and are now in college.  During her college years, it was still the Kramers house that she would return to, to spend each holiday.

And at the age of 22, Steffanie was legally adopted by the Kramers.

Steffanie is now proudly giving back by working for FSS as their Student Coordinator and serves by mentoring aged-out foster youth and getting them on the track for success.  She also works for a school in their attendance office to offer support to students who have low attendance rates.  She maintains a healthy relationship with her biological mother.  Steffanie is happily married to her husband, has her own apartment complete with sweet kitties, and hopes to foster once they move to a larger home.

The Kramers are still as wonderful as can be.  Sadly, Steffanie’s adoptive mom passed away three years ago, but her father is still pouring love into his children, including Steffanie’s younger adopted siblings.  Her parents have ten children in total and have fostered 43 children over their fostering journey.

Steffanie stated that she owes everything to God, and she is so grateful to her family and everyone who spoke truth into her life that made her believe she was and is so worthy of love.

All it takes is one family to make the difference in the life of a child.  It takes one big yes, and then a yes each and every day after to choose to bridge the gap for these deserving kids and show by example what a loving and healthy home looks like.

Welcome to our blog!  My name is Rachel and surrounding me is my family.  My husband is Logan, and we have three boys named Micah, Kedon, and Noah.  We are a foster and adoptive family, and we have gotten the privilege of saying the biggest “yes” to 20 kids, and we are still counting!  Logan and I began our fostering journey in April of 2019, and it has been quite the joyous roller coaster ever since.  I hope you enjoy the blog, and I look forward to connecting with each of you through our stories and experiences!